My Hero Academia: The Strongest Hero

Spectacular battles based on this successful manga 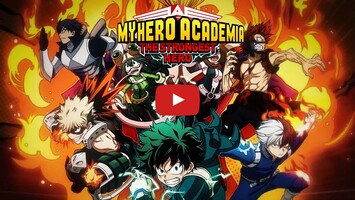 Advertisement
My Hero Academia: The Strongest Hero is a fantastic role-playing and action game that fully immerses you in this popular Shōnen Jump manga created by Kōhei Horikoshi. Here you have a fully official action MMORPG where you can control the best known characters from Boku No Hero: Midoriya, Todoroki, Bakugo, Iida, Uraraka, Tsuyu ... the list goes on.

You'll start your adventure in this game a lot like in the original story: the fateful encounter between All Might and Deku. After the prologue, you'll begin your journey in My Hero Academia: The Strongest Hero in a totally original campaign. This means manganime fans will be able to enjoy new events. You'll travel around the city of Musutafu freely while you carry out different missions that will be assigned to you from the Academy. Your mission in all of them will be to defeat all the villains who want to cause chaos.

The combat controls in this game are similar to other mobile ARPGs: you control your character using a virtual joystick on the left, while the attack buttons are on the right. Each of the heroes in the game has their own characteristic moves, so you'll be able to enjoy Deku's legendary Detroit Smash when you have enemies in front of you. You won't only lead a single hero, but in each mission you'll be able to control a maximum of three characters.

The game has the typical gacha recruitment system which you can use to add more heroes to your squad. And if you already have them, you can convert them into a power boost so that no enemies stand a chance against your characters in The Strongest Hero. Plus, you can improve their skills and characteristics with different objects that you'll get in the missions themselves or in the rewards that you'll earn by achieving different objectives.

My Hero Academia: The Strongest Hero is a fantastic action MMORPG that offers you spectacular graphics and all the thrill of one of the most entertaining shonen games in existence.
Reviewed by Nelson de Benito
Advertisement

Is this offline or offline?

One Piece Treasure Cruise
Relive the adventures of Luffy and his crew in turn-based battles
Bleach Brave Souls
Official video game for Bleach the anime
JoJo's Bizarre Adventure Stardust Shooters
An amazing and epic action game
Yu-Gi-Oh! Duel Links
The most spectacular Yu-Gi-Oh! card duels
SWORD ART ONLINE: Memory Defrag
The official game for the popular manganime
One Piece Thousand Storm
3D battles with the characters from One Piece
Captain Tsubasa: Dream Team
Tactical soccer based on the popular anime
Fate/Grand Order
The world is ending and there's only one way to save us all

Similar to My Hero Academia: The Strongest Hero